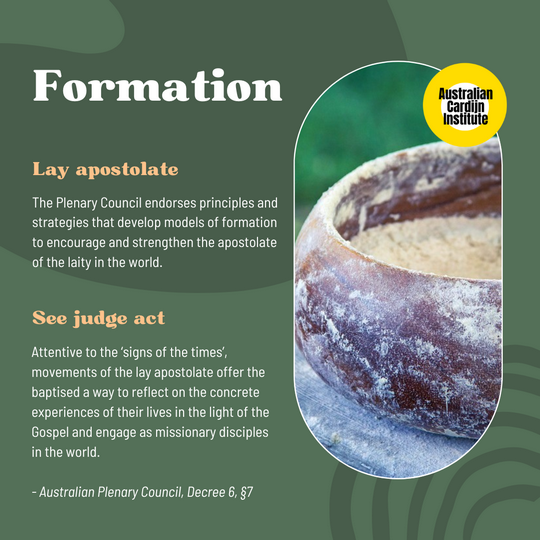 Over the last 60 years since Vatican II, the concept of “lay apostolate” has fallen into disuse in Australia and many other English-speaking countries.

This is a great paradox given the Council’s historic and wholehearted endorsement of the concept, particularly in Lumen Gentium, Apostolicam Actuositatem and Ad Gentes.

Fortunately, the same is not true in many other countries, including France, Switzerland, Belgium, Spain, Paraguay and Rwanda, just to name a few.

Founder of the Young Christian Workers (YCW) movement, Cardijn, of course, was a great promoter of what he called “the specifically lay apostolate of lay people.”

The Vatican II Dogmatic Constitution on the Church, Lumen Gentium explicitly endorses this concept in §31 which states that “what specifically characterizes the laity is their secular nature.”

It explains this as follows:

But the laity, by their very vocation, seek the kingdom of God by engaging in temporal affairs and by ordering them according to the plan of God. They live in the world, that is, in each and in all of the secular professions and occupations. They live in the ordinary circumstances of family and social life, from which the very web of their existence is woven. They are called there by God that by exercising their proper function and led by the spirit of the Gospel they may work for the sanctification of the world from within as a leaven.

Moreover, if there’s a single person most responsible for its inclusion in the Vatican II documents, the credit goes to Cardijn.

Paul VI himself recognised this in a speech to French-speaking Council Fathers a few days after the promulgation of Apostolicam Actuositatem, the Decree on the Lay Apostolate.

“For the first time in the history of the Church, the Council has just consecrated one of its decrees to the laity and to their apostolate: it is now a matter of putting it into practice,” the Pope said. “Yes, the good seed sown half a century ago by a few generous pioneers, and in particular by a young Belgian priest, has really given one hundred to one!”

So evident was Cardijn’s role that Paul VI did not even need to name him!

This site therefore presents a series of resources aiming to enable a new reception of the concept of lay apostolate in Australia and other countries where it has disappeared or failed to emerge.

It includes many key documents by Cardijn himself, as well as by his successor as chaplain to the International YCW, Marcel Uylenbroeck, who was also Pope John Paul II’s first choice as successor to Cardinal Suenens in Brussels, a role he was sadly unable to take up owing to the cancer that killed him, and by the late Liverpool Archbishop Derek Worlock, who worked with Cardijn as a peritus in the Lay Apostolate Commission at Vatican II.

We feature a short biography of Rosemary Goldie, founder of the University Catholic Federation of Australia, an affiliate of the International Movement of Catholic Students, Pax Romana, also a lay auditor at Vatican II, before becoming the first woman to hold a leadership post at the Vatican.

There is also a talk by the late Adelaide priest, Hugh O’Sullivan, also a chaplain to the Australian YCW and to the International YCW in Asia-Pacific.

Also included are speeches by Patrick Keegan, the British YCW and lay leader, who was the first lay person to address Vatican II, and Romeo Maione, a prominent Canadian lay leader.

Submissions to the Australian Plenary Council